This post contains affiliate links at no cost to you. Disclosures.

Alright, everyone. This is where I admit that I did something wrong as a parent. I didn’t know it at the time but now I understand how every little choice we make as far as drinking and eating habits with our kids matters. It’s not to say that these are dealbreakers, but it makes sense that the things you introduce into your child’s diet and routine are likely to stay for awhile.

I think we all do it, because in the bustle of life, we can’t control everything we would like to. Furthermore, we don’t have time to. If having a cheesestick (or 4) in one day will make my toddler happy on a day when all he’s eaten is an Oreo (stop judging lol), then fine. But where I tried to fix a mistake is with my toddler’s apple juice.

Now, he didn’t start liking juice until he was close to 2 years old, but once he did, that’s all he wanted. He gradually stopped asking for milk or water and on days when he was really thirsty, I would say he was drinking a few cups of juice a day. We have dental people in our family that suggested he would be okay as long as he didn’t drink it during bed, but I knew that the level of sugar content in juice (28 g for apple juice!) was a big no-no. I suspect that my mother-in-law knew, too, but didn’t want to step in. Ha. Thanks, Jenny 🙂 Apple juice and kids’ teeth and health, though, is something I did research.

Anyway, one day a few months ago, I finally said I was going to wean him from the juice. Maybe some parents out there will think this is drastic, but I felt this was the right choice. The doctor had said no more than 8 oz. a day maximum. My husband said some days he didn’t really finish his cup of juice anyway, but I didn’t care. That just meant he was drinking less, but I wanted to make it so that when he did get thirsty, he would turn to water–not juice.

So, here are the steps I took.

If there’s less to drink, less harm to his teeth because of apple juice, right? I told myself this, and when he would run out of juice, my husband and I had another opportunity to offer him something else to drink. Our toddler felt he had to consider other options once his juice was gone, and responded better this way versus when we took his cup away from him altogether. If he could see it was full and sitting in the fridge, he would get mad at us. This way, it’s almost like he no longer saw it as us taking something away but rather as us offering something during a time when something he had was gone.

With the opportunity to offer other beverages, my husband and I would encourage our son to try milk or water. He wasn’t always up for it, but sometimes he was interested enough. We would offer milk for dinner almost every night, so he grew accustomed to the routine of drinking milk at night. He was still not as excited about plain water but he did accept it nonetheless. We were making progress!

My toddler got excited each time we brought out different cups from the cabinet. He often wanted to use our ‘adult’ cups, so I figured, let’s start there. I let him drink from our large plastic cups so he could think it was fun. But he would only use them when he saw us drinking from ours (unfortunately, my husband does not believe in drinking water, so we still had to explain to my son that dad’s soda was only for him). Eventually, my toddler starting sipping his water from dad or grandpa’s thermos mugs. And he drank milk from an orange cup with a handle that my mom had given him when he was younger. Now, we had him drinking milk and water as long as we got creative with the containers. He had

You get the picture. Lots of variety made him think drinking these beverages was exciting.

Although we had made progress, our toddler still insisted on juice for a majority of the time. I don’t blame him. Sugar is addicting, and he had gotten used to a lot of it. In order to remedy this, I switched to cranberry juice and started watering it down more and more every few days. He could still taste fruity flavor but not as much. Unfortunately, since cranberry juice is tart to begin with, he could tell I did something to the juice and ultimately stopped drinking it. Also, cranberry juice is not good when it’s been sitting out, so if he had left it on the couch or in his room, once he returned to it, he was angry that it tasted bitter and yucky.

The next step was to restrict him from juice during certain times. Bed time was the primary concern so we started there. Whenever he asked for juice as he was going to bed, we told him that he couldn’t have juice for bed, and gave him water instead. He rejected this notion so we would give him water bottles, which he actually enjoyed. Some nights he just threw a fit so we would leave the water bottles on his book shelf, and he would get up and drink it if he was actually thirsty. Otherwise, he would fall asleep just fine without juice or water.

Back to watering down juices…clearly, this wasn’t going to work long term, so we switched him to Gatorade. I had been drinking a lot of these during my first week home from the hospital with my newborn in order to stay a bit hydrated after I had fallen ill, and he had drank them before, so we came back to this. Instead of apple juice, we bought him a few blue bottles of Gatorade and allowed him to drink these periodically (maybe once or twice every other day). He liked these a lot!  But still, it was too much syrup and with summer approaching, we couldn’t have him living off these.

Propel has worked marvels. It’s Berry-flavored water (the one we buy, anyway). He’s been drinking these almost every day. It’s not ideal, but he doesn’t ask for apple juice anymore, and he’s opened up to trying even chocolate milk. He calls it his “tasty water” haha, and we are more than happy to oblige as long as he is not obsessed with apple juice anymore. Compare the nutrition labels (juice is from Market Pantry at Target–and no, we are not sponsored. It’s just the one we buy since it’s cheap lol)! 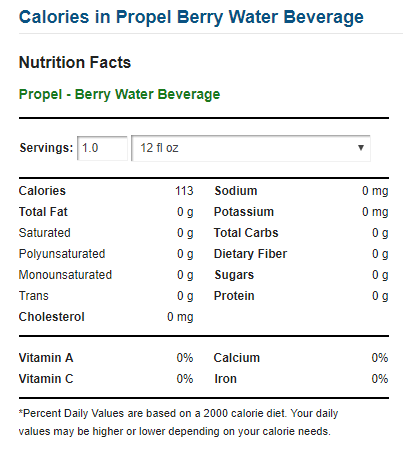 Now that my son is drinking Propel, and the bottle looks similar to a normal water bottle, when I take regular water with us to the park or to play outside, he will happily drink it. I think he has also noticed that it hydrates him more than sugary drinks after he’s had a long day of playing in the heat. My husband started doing side jobs that require him to work outside as well, so he drinks more water than he used to. I’m glad we can show our son by example that water is the best choice.

Ideally, the next step is that we stop buying Propel altogether and just make infused water with fruits, but with a new baby at home, this is most efficient. I think in a few weeks we will use our dispenser to make water with lemons or strawberries, but that can wait for now. I’m just happy we don’t have to buy 6 gallons of apple juice every time we go grocery shopping anymore! Yes, that’s what it boiled down to because it was a nightmare in our home if he ran out of juice and we didn’t have any for him since he would ONLY drink that. Now that he knows there are other drinks that are tasty but also healthier, he rarely mentions apple juice and when he does drink it, he understands it’s a treat.

Maybe this will give you some ideas for your own toddler’s habits, if you want to start cutting out some sugar from his drinks. Tailor my steps as you see fit, or just choose one as a bouncing off point, but I hope my story helps you in some way! We all want what’s best for our kids, and this one small change has made a world of difference already. Water is too important to not want to make it something my child loves!